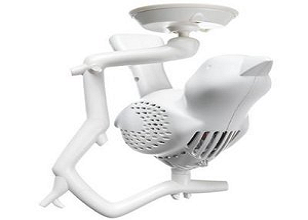 Chic-a-Dee Bird Styled Smoke Alarm / Detector – Brand New ! The Chick-a-Dee ® smoke detector was selected as the winning design in a design contest organised by the Union of Dutch Insurance Companies in the Netherlands in the fall of 2006. The design was selected out of 50 entries sent by industrial designers at universities all over the Netherlands because of its combined functionality and design. Buy the Chick-a-Dee now ! The Chick-a-Dee ® smoke detector was specially developed for home interior, appealing to lovers of ‘design’ and families with children. The Chick-a-Dee ® smoke detector is equipped with a 1.5 year battery lifetime and a three-year warranty. The Chick-a-Dee ® takes its name and appearance from the American Black-capped Chickadee (Poecile atricapilla). This name is a tribute to its warning call, the phonetic Chickadee sound. At the smallest threat, the bird calls chick-a-dee-dee, and in more serious circumstances, the call becomes a loud dee-dee-dee sound. As soon as smoke is detected a 85 db alarm signal is activated. Under normal conditions, a control light flashes once a minute. The Chick-a-Dee can be tested by pressing the test button.