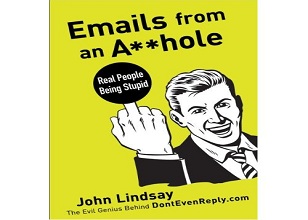 Emails from an A**hole: Real People Being Stupid

“It’s like Sasha Baron Cohen on the internet.” – Jane Wells, CNBC
When John Lindsay launched DontEvenReply.com in June 2009, it became an instant sensation. With 60% of the book featuring entirely new material never before available on the website, Emails from an Asshole offers fans a fresh opportunity to revel in people’s gullibility. Posing as a customer or seller, Lindsay responded to a variety of classified ads, making ridiculous offers to unsuspecting victims. Their responses, and the ensuing conversations, will have readers simultaneously laughing non-stop and gasping with disbelief.