For the most part everyone drinks a lot of soda. We can’t help it, its awesome and now when your done with the bottle they have another use other than recycling them. Now you can launch them into space, not quite space but 100 feet in the air is pretty high. All you need to do this is the Aquapod Soda Bottle Rocket Launcher.

This rocket launcher works just like the handheld ones we had as kids, The Aquapod 2 liter bottle rocket launcher uses water and air pressure to launch the bottles into the air. All you have to do is fill the bottle with water until it is half full or half empty. Next you plug it into the launcher and make sure to use the U peg to secure the launcher to the ground. Then pump it up and pull the launch cord in 5-4-3-2-1 blast off! An instant soda rocket ship! The Aquapod Soda Bottle Rocket Launcher can be setup and ready to go in less than a minute. It will provide fun for the whole office, science fair, family and you. 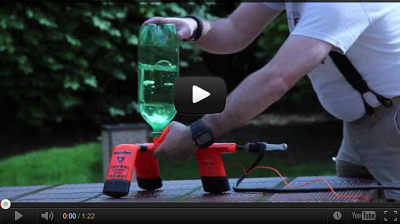