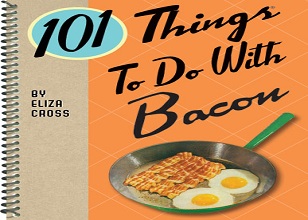 101 Things To Do With Bacon

Bacon and bacon recipes are appearing in the news, cited as a food trend, featured on the Food Network, and most recently as an element in desserts.

Eliza Cross is an award-winning author and journalist. She also develops recipes and styles cuisine for corporate and print media. Eliza is the founder of the bacon enthusiast society BENSA International. She lives in Centennial, Colorado.